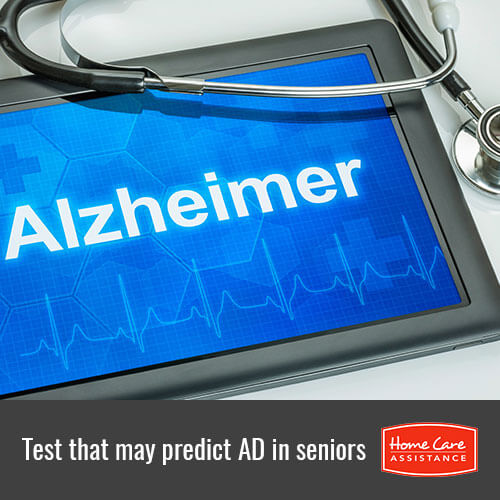 A new smell test is showing promising results in early detection of Alzheimer’s. Researchers hope early detection through this test will help predict cognitive decline in seniors. As part of our effort to provide trusted home care in Anchorage, Home Care Assistance wants to update you on the latest findings in Alzheimer’s research.

Developed to measure olfactory function, the University of Pennsylvania Smell Identification Test, commonly referred to as the UPSIT, may provide a new way to predict Alzheimer’s disease. Richard Doty, a renowned researcher in the field of olfactory function and dysfunction, developed the test. The UPSIT is considered the gold standard of smell identification tests for its practicality and reliability.

Cognitive Function and Sense of Smell

A decrease or change in the sense of smell is often an early symptom of Alzheimer’s disease. Alzheimer’s affects numerous parts of the brain, including the olfactory bulb, temporal cortices, and amygdala. This can cause seniors with the condition to have difficulty performing olfactory tasks that involve certain cognitive functions.

UPSIT as a Predictor of Alzheimer’s

Researchers from New York State Psychiatric Institute, Columbia University Medical Center, and New York Presbyterian Hospital gave the UPSIT to nearly 400 seniors without Alzheimer’s. During a follow-up four years later, 12.6 percent of the people who had scored low on the UPSIT had developed Alzheimer’s, and 20 percent exhibited cognitive decline.

In a second test, the researchers administered the UPSIT to a group of 84 seniors. They also measured the amount of amyloid in the brain using PET scans or cerebral spinal fluid analysis. Amyloid is the protein that forms the plaques found in the brains of individuals with Alzheimer’s. The test determined seniors with elevated levels of amyloid and a low UPSIT score were three times more likely to experience cognitive decline than those who scored higher on the UPSIT test.

The Future of Alzheimer’s Testing

Current Alzheimer’s testing can only detect the disease in advanced stages when there is already significant brain damage. These studies add to the growing body of evidence that shows that odor identification tests may help detect Alzheimer’s earlier and even predict cognitive decline. The UPSIT is also less expensive than PET scans or lumbar punctures.

If your loved one has been diagnosed with Alzheimer’s, you may want to consider hiring a caregiver who can help stimulate his or her cognitive function. Expertly trained caregivers from Home Care Assistance, a leading and trusted name in senior home care, can provide Alzheimer’s care Anchorage families trust. Home Care Assistance also offers comprehensive Parkinson’s, dementia, and post-stroke care. Call (907) 770-0907 to speak to a friendly Care Manager and learn more about our in-home care services.