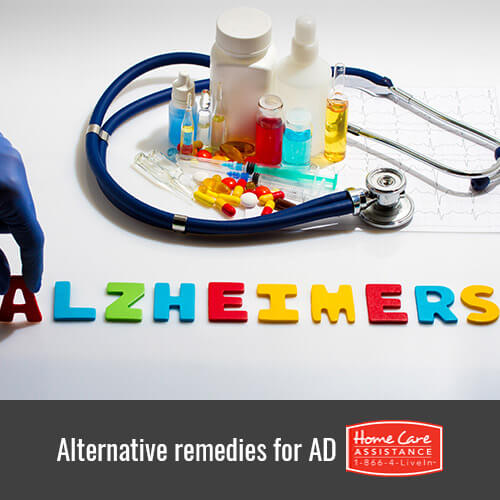 Certain medications have proven effective in alleviating the symptoms of Alzheimer’s disease. However, seniors with this condition may also benefit from taking a more natural approach to their treatment. Though the research being conducted on these alternative Alzheimer’s remedies is still inconclusive, the results show great promise. The Anchorage, AK, Alzheimer’s care professionals at Home Care Assistance discuss 4 of these treatments and their possible effects on Alzheimer’s.

Coconut oil contains caprylic acid, which the body breaks down into proteins called ketone bodies. These proteins are similar to those found in Ketasyn, a medicine that has been shown in limited studies to boost memory and slow cognitive decline. It is important to note coconut oil has never been clinically tested in seniors with Alzheimer’s disease.

Dutch researchers have discovered omega-3 fatty acids are beneficial in reducing cognitive impairment in animals. Although similar research has not yet been conducted in humans, the National Institutes of Health supports the use of omega-3 fatty acids as an alternative treatment for Alzheimer’s disease. Omega-3 fatty acids can be found in certain oils, nuts, and fatty fish like salmon.

Some alternative treatment advocates claim the antioxidants, vitamins, and minerals in coenzyme Q10 (CoQ10) may prevent or stop the progression of Alzheimer’s disease. Though the enzyme is vital for healthy body function, it has never been clinically studied as a way to treat Alzheimer’s disease. CoQ10 supplements are readily available in most pharmacies and health food stores.

A 2004 study conducted by the University of Maryland Medical Center suggests Ginkgo biloba protects against nerve damage and cognitive decline in people with Alzheimer’s. Study participants who received Ginkgo biloba extract over a 3-month period showed increased attention span, cognitive function, and memory. However, the results of a similar study published around the same time in The Lancet Neurology were less convincing.

The effectiveness of many alternative treatments for Alzheimer’s remains unclear because they have not yet been subjected to large clinical trials. Including alternative remedies as part of a treatment regimen is a personal decision, and Anchorage home care experts want to stress the importance of consulting a doctor to determine if these treatments might cause side effects or interfere with traditional medications.

Engaging in brain-boosting activities is another alternative way to alleviate Alzheimer’s symptoms. At Home Care Assistance, we offer a program called the Cognitive Therapeutics Method, which uses activities to slow cognitive decline and delay the onset of dementia. In addition to Alzheimer’s and dementia home care Anchorage, AK, families trust, we also offer specialized Parkinson’s and post-stroke care. For more information on our senior care services, call one of our knowledgeable Care Managers today at (907) 770-0907.