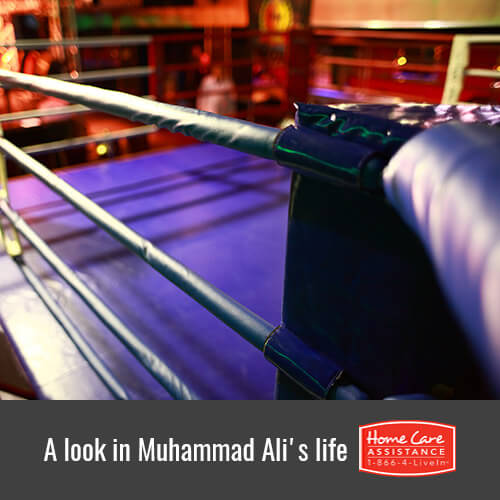 Though many people will remember Muhammad Ali as one of the best fighters in the boxing industry, others will forever think of him as the champion in his long fight against Parkinson’s disease. Anchorage, AK, home care experts share some details about Ali’s battle and how his strength inspired others.

Muhammad Ali often ran around the boxing ring and taunted his opponents, spewing various catch phrases. During his final fight, many observers noticed his hands were shaking and he was not moving as quickly as he once had. People around the world came to the conclusion time had caught up with Ali and that he should retire because of his age. However, Ali was already developing Parkinson’s, and the symptoms were becoming noticeable.

Some of the common symptoms associated with Parkinson’s disease include:

How He Lived with Parkinson’s

As the disease progressed, Ali’s symptoms became more severe. His speech slurred, and eventually he was no longer able to speak in public. His wife and other family members learned how to communicate with him, but it was difficult to figure out what he was saying. Parkinson’s affected one side of Ali’s body, and he began taking levodopa to treat the disease. Levodopa is one of the most effective medications for Parkinson’s, and it helped Ali in his fight against the disease for more than 3 decades.

Ali may have been strong during his battle with Parkinson’s, but he still endured many of the health complications that accompany the disease. As the condition continued to progress, he experienced difficulty sleeping. Ali’s wife Lonnie said her husband had trouble getting comfortable at night, which lead to sleep disturbances.

His Search for a Cure

Ali was a huge advocate for Parkinson’s disease. He went to many events and agreed to interviews that helped raise awareness for the disease, and he supported research for Parkinson’s in hopes of finding a cure. Ali also went around the world to talk about Parkinson’s prevention. He informed people there were healthy lifestyle changes they could make to reduce the risk of developing Parkinson’s. Examples of these changes include avoiding caffeine and participating in aerobic exercise.

Making healthy lifestyle changes is often an effective tactic for fighting Parkinson’s. At Home Care Assistance, we offer a program called the Balanced Care Method (BCM), which encourages seniors to eat healthier, exercise more often, and engage in regular social and mental stimulation. All of our Parkinson’s caregivers are trained in BCM, and they can also assist with a wide array of daily activities. For more information on high-quality Parkinson’s care Anchorage, AK, families trust, call a Care Manager at (907) 770-0907 to request a complimentary in-home consultation.